History of Carrie the Musical 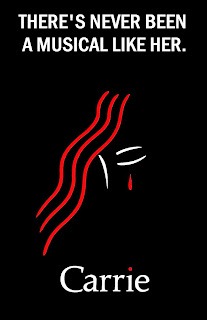 After seeing a performance of Alban Berg's opera Lulu at the Metropolitan Opera House in the early 80s, Michael Gore and CARRIE screenwriter Lawrence D. Cohen got the idea to turn Stephen King's novel Carrie into a musical. Gore and his FAME collaborator Dean Pitchford composed the music and Cohen rewrote his script to suit the stage, but the actual road to the stage was a long and bumpy one.

In August, 1984, the musical version of Carrie seemed to finally be coming together. A workshop was staged (a run-through to test drive the play, gage criticism and find faults) with Annie Golden (lead singer of punk band The Shirts, star of the film version of HAIR) in the title role, Todd Graff (who starred in "The Electric Company" and went on to write and direct the cult hit musical CAMP) as Tommy Ross and Maureen McGovern (singer of THE POSEIDON ADVENTURE's hit, "There's Got to Be a Morning After") as Margaret White. The workshop included the first act of the play, acted and sung without effects or dance -- the second act was written but not performed. At this point, the play seemed to be shaping up nicely. It was rooted in reality, featured a lot of dialog, many scenes at the school and in the White's home, and a lot of songs (many were ultimately cut -- "The Lord's Prayer," "It Only Has to Happen Once," "The Gym Song," "I Never Dreamed," "Tommy's Poem"). After the workshop, it was announced that Carrie would be hitting Broadway in the fall of 1986, but funding wasn't raised so the project sat in limbo for several years.

Finally in late 1987, Carrie received some much needed financial backing and was finally headed for the stage. For various reasons, the show didn't open on Broadway, its first production was in England's Stratford-upon-Avon for the Royal Shakespeare Company in February of 1988, with a cast/crew that was split between Americans and Brits. 17-year-old British newcomer Linzi Hateley was cast as Carrie and Broadway star Barbara Cook, intrigued by the music and material, signed on to play Margaret White. '60s singer Darlene Love ("He's A Rebel," "Da Doo Ron Ron") played gym teacher Miss Gardener and FAME alums Gene Anthony Ray starred while Debbie Allen and Bronwyn Thomas got aboard to work on the show's choreography.

Veteran stage director Terry Hands had never mounted a musical before, which was more than a bit problematic for everyone involved. Behind the scenes, there were constant arguments amongst the director, writers, choreographer, and seasoned cast members, all of whom wanted to mount the best show possible -- though they each had a different vision for what the show should be. Rigorous rehearsals averaged eight hours before every performance -- though AEA rule stated once a production has previewed, the cast is only allowed to rehearse 8 to 12 hours per week. The pivotal pig's blood sequence couldn't be achieved on stage quite like one would envision it -- logically, the actors would break their necks slipping around in the corn syrup that would slather the stage and Hateley's microphone would be shorted out if she were drenched -- so they had to come up with a compromise. Ultimately Chris and Billy ran on stage and dumped a small cup of blood on her head. Gone was the rooted reality of the Workshop production, the new staging was surreal, featured little actual dialog, and the emphasis on Carrie's telekinetic/pyrokinetic abilities was so slight that those unfamiliar with the story weren't sure what was happening.

On opening night, Cook was nearly decapitated by an elaborate set piece (a staircase!) and promptly resigned, though she stayed on for the remainder of the Stratford run... which was less than a month. Choreography, song structure and dialogue were changed daily, so the show was never performed exactly the same way twice. Early performances featured songs that were quickly dropped ("Her Mother Should Have Told Her," "White Star," etc.) and several that were drastically re-written ("Heaven" and "Crackerjack" -- which became "Out for Blood"). Initial audiences roared with laughter throughout the play. Instead of embracing this audience reaction, and fearing that the show was being viewed as pure camp, the director painstakingly cut every line that got a laugh. The Stratford reviews were mixed, and the press accused the Royal Shakespeare Company of using subsidized funds to mount a Broadway tryout. Despite the bad press, ticket sales were high.

Presumably because the show was a sell-out in Stratford, it opened on Broadway less than two months after closing in England with little advance promotion or ticket sales -- though the debut was bumped back several times. Some minor tweaking was done, but otherwise it was nearly identical to the RSC staging (taking into account the neverending rewrites). The cast was the same except for Cook, now replaced by Betty Buckley (who starred as the gym teacher, Miss Collins, in the film version). The audience who saw the initial preview on April 28, 1988 (including Stephen King) weren't sure what to make of the train-wreck that was Carrie the Musical. The ads proclaimed "There's Never Been a Musical Like Her," and they were right! The audience was divided -- half were charmed by what they saw, and the other half adamantly hated it. As the play came to an end, boos were heard from the upper balcony but those who loved the play squelched the naysayers and the performance ultimately ended with a standing ovation.... 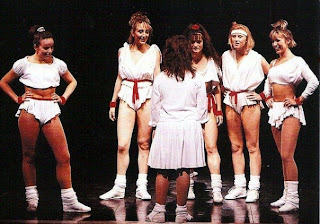 The buzz surrounding the play on opening night was overwhelming. The critics gave utterly brutal reviews, but those who'd seen the show or heard the buzz returned for the few weeks of previews that remained. Bootleg audio and video of the performances began to circulate, and have been circulating ever since. After two weeks of previews and five actual performances, the financial backers pulled their money out and Carrie closed prematurely, much to everyone's surprise. 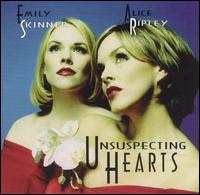 But the story doesn't end there. Although it was considered unsuccessful, the Broadway show was instantly legendary, and it remains that way. In 1991, Ken Mandelbaum released his book Not Since Carrie: 40 Years of Broadway Musical Flops featuring Linzi Hateley on the cover and two short chapters devoted to the production. This book added to the mystique of the show and catapulted it into a league entirely of its own.

Betty Buckley released the song "When There's No One" on her CD "Children Will Listen" (it resurfaced on "Betty Buckley's Broadway") and Linzi Hateley released the title cut from Carrie on her album "Sooner Or Later" (both albums are very difficult to obtain today). Musical theatre actresses Emily Skinner and Alice Ripley released an album titled "Unsuspecting Hearts" featuring that title tune, which was sung by Carrie and the gym teacher in the play. And then there were three more versions staged...
_______________________________________________
In 1999, Stagedoor Manor theatre camp in New York revived the show for two performances with Julie Kleiner in the lead role. Although completely unauthorized and technically illegal, those at Stagedoor used the Broadway script but re-worked the ending. Much to their surprise, Michael Gore was in attendance, and while he spoke out against them for producing the play without permission, he enjoyed the production and allowed them to complete the second show. There's not a lot of information in circulation about this performance. 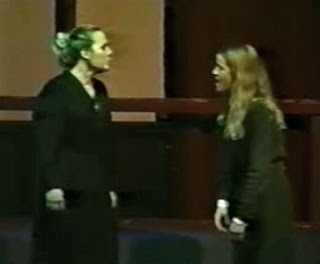 Another two performances were mounted at Emerson College in Massachusetts, allegedly with the consent of at least one of the show's authors. Although it's shown up on You Tube, there's a scant amount of information about this production in cyberspace (I'm not even certain of the year). This version incorporated portions of both the Stratford and Broadway versions as well as scenes from the '76 film. One lengthy, scripted scene that was cut out of the movie (and is presumed lost) replaced "Don't Waste the Moon," "It Hurts to Be Strong" was axed and replaced with Stratford's "White Star," plus a few songs and scenes were rearranged and slightly altered. From a storytelling perspective, this version is far more coherent and satisfying than the Broadway staging.

The third revival was in 2001, at a high school in Denmark. Allegedly, this staging was authorized by the playwrights, and a soundtrack was made available for sale at the school, making it notable for being the only staging of the play with an official soundtrack. The songs, however, are in Danish. 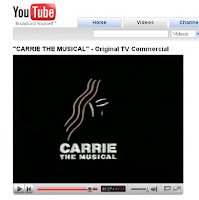 Although theatre buffs, fans of Stephen King and the films have been aware of the play for two decades, it's gained more mainstream attention thanks to the internet in recent years -- in particular, on You Tube. Shortly after You Tube was launched, clips from the musical began being streamed into people's homes and they continue to bounce on and off of the site. From there it's snowballed -- a 2007 performance of "I'm Not Alone" by Natalie Weiss which was loaded onto You Tube was a sensation and has inspired countless young women to use the song for their auditions (I know because many have contacted this site attempting to obtain the sheet music).

There have been rumors over the past few years of a new workshop and that a large-scale revival is being prepped (most recent rumors cite a new workshop being prepared for staging in late 2008), though these rumors are unsubstantiated. In an all-too-brief featurette on the Special Edition DVD of the 1976 film, it was revealed that the writers are continuously being asked to revive the show. A petition requesting that they release the rights so other theatres can legally mount productions has been online forever. There have been at least three stage spoofs and numerous websites (other than mine) created for Carrie the musical... and since fleshing out this section, I've been getting five times more traffic on this site for the musical than the section for the 1976 film. There's something about this musical that clicks with people -- even with those who don't consider themselves fans of musical theatre. With all of the continued interest, it's safe to say that the saga of the musical is far from over... and perhaps the day will come when CARRIE will no longer be remembered for being Broadway's biggest cult flop.