SCARRIE was a play that first surfaced in 1998 as the late-night show called sCarrie! The Musical at the Sweetcorn Playhouse in Andersonville, Illinois. Starring a predominantly male cast, it was a campy but loving send-up of the film which was so successful that it ran for a year and a half. Sadly, the Sweetcorn closed, though writer David Cerda moved on... 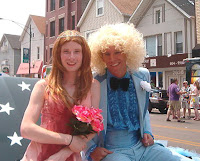 In 2005, the acclaimed Chicago-based theatre troupe Hell in a Handbag Productions, the mad geniuses behind other cult hits like POSEIDON! An Upside-Down Musical, Rudlph the Red-Hosed Reindeer, and How What Ever Happened to Baby Jane Happened revived the production. Cerda revised some of the songs wrote an additional ten tunes. With Joey Steakley in the title role and Ed Jones as Margaret White, the play previewed on July 1, 2005, opened the following day and ran 22 performances, closing on August 2, 2005 in at The Theatre Building in Chicago. A cast CD was recorded in early July and released shortly after. It's available for purchase from "Handbag"'s website.

For more information about the production, check out Hell in a Handbag's page for SCARRIE.