Whatever Happened to Nice Little Kids?

Us Weekly
June 27, 1978
By Roger Ebert
[NOTE: The links here lead to Roger Ebert's vintage reviews on his site]

The one thing you can count on walking into a movie like ALICE, SWEET ALICE is that Alice will not be sweet. And you get the feeling from the ads that CARRIE and JENNIFER aren't about cute teenage cheerleaders.

Linda Blair has been possessed by the devil and her mind is controlled by weird scientific forces in THE EXORCIST, Parts I and II. In THE BAD NEWS BEARS, Tatum O'Neal has lines that would make Robert Mitchum Blush. Jodie Foster became a star playing a 12 year-old hooker in TAXI DRIVER. Now so has Brooke Shields in PRETTY BABY. Amy Irving has a neat trick in THE FURY: she can make John Cassavettes spin in the air and explode. Coming up for summer: DAMIEN: OMEN II, in which 13 year-old Damien turns out to be the antichrist.

Whatever happened to movies about kids? There are more than ever. It's just that the kids in them are so scary you turn to THE GREEK TYCOON for some nice, dumb escapism. Look at the movie ads: it's almost as if the only G and PG rated films these days are the ones about adults.

Why are we suddenly so fascinated by stories in which children are horrifying, malevolent forces? In Hollywood's golden age, child stars had to have tutors on the set so they could learn math in between scenes with Lassie. Today's child stars need psychiatrists -- if not exorcists. 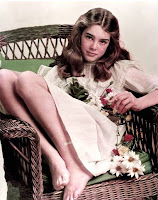 Take, for example, Brooke Shields, who has received such good reviews for her sensitive performance as the young prostitute in PRETTY BABY. Some of the early publicity on the movie was negative: How could that evil French director Louis Malle subject a child to such an unsavory role? Maybe because Malle knew that Shields had already been through some pretty harrowing experiences in the movies.


In 1976, when she was only 10, Shields was in COMMUNION, a thriller that played a few film festivals, got generally good reviews and then disappeared until Shields became an overnight star with PRETTY BABY. Now COMMUNION has been retitled ALICE, SWEET ALICE and re-released with ads featuring Shields. After the first 20 minutes of the film, she's murdered -- but what a way to go! She's knifed to death on her first day of communion, stuffed into a wooden chest at the church, and her body is set on fire with holy candles. After that, PRETTY BABY must have been a breeze.

Women in distress have always been a popular subject for movies, especially made-for-TV movies. But the endangered women always used to be grown-ups: Audrey Hepburn in WAIT UNTIL DARK or Lee Remick in THE OMEN.

Now it's the kids. And they're not the victims, they're the killers. Linda Blair blazed the way in THE EXORCIST, when her private demons sent priests hurtling out the window. Then she put Richard Burton through agonizing experiences in THE HERETIC: EXORCIST II (Burton got his turn in THE MEDUSA TOUCH, in which he was the madman with telekinetic powers).

Kids seem to make better villains. The two telekinetic kids in THE FURY (Amy Irving and Andy Stevens) send victims flying to their deaths in amusement parks or cause their bodies to explode. CARRIE, of course, was the enormous box-office hit in which Sissy Spacek brought the high school down in flames, right in the middle of the senior prom. One of this season's biggest hits is JENNIFER, inspired by CARRIE, in which the unpopular girl at school (Lisa Pelikan) has the power to summon snakes out of the air. The snakes, of course, then eat everybody.


These days at the movies, whenever you get a big close-up of a young girl's eyes, it probably means the sadistic old gym coach is going to hit the ceiling at high velocity. I remember more innocent times, when the girl would cry out something like, "Lassie, come home," and that was that. Now Lassie is better off in the woods, hiding behind a big tree.

I WANNA HOLD YOUR HAND
Goofy but fun. It's a screwball comedy set on the day the Beatles make their first appearance on "The Ed Sullivan Show," and about kids desperately determined to see the show or at least a real Beatle. Will Jordan does his patented Sullivan imitation and the movie's clever at combining videotape of the real Beatles with a stage appearance by doubles.
Posted by Vinnie at Wednesday, June 06, 2007