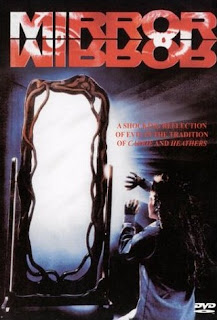 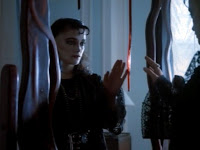 One of the most blatant rip-offs of CARRIE has to be the 1990 film MIRROR, MIRROR. Interestingly, the film managed to distance itself enough that it stands on its own merits, and it was successful enough to be followed by a string of increasingly inferior, barely related (and ultimately terrible) sequels. In the film version of Stephen King's SECRET WINDOW, the lead character said of storytelling, "The only thing that matters is the ending." True, and this one packs a wallop! If you're a fan of CARRIE, I highly encourage you to seek out this film, though it seems to go in and out of print routinely and it should be noted the DVDs are mastered from a good print, not the original negative. 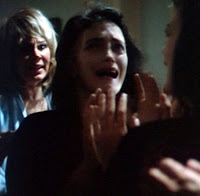 Megan Gordon (Rainbow Harvest) moves from L.A. to suburbia with her recently widowed mother (Karen Black). Upon arrival in their new home, Megan finds a strangely framed, antique mirror waiting in her bedroom, and she insists on keeping it. At her new school, Megan (who bears an uncanny resemblance to Winona Ryder's Lidia character from BEETLEJUICE) is taunted by her peers -- except for new classmate Nikki and hunky jock Ron. Before long, Megan finds herself channeling the energy that lives within her bedroom mirror to takes down her foes. 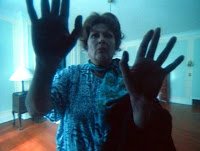 Doesn't seem that much like CARRIE, does it? But there are more than a few passing similarities -- the filmmakers seem to have lifted the basic character structure from the '76 film. First of all, we have the outcast Megan (Carrie) and her slightly insane mother Susan (Margaret) -- though Susan is merely crazy, not the overwhelming psychopath that Margaret White is (Black, however, gives an over the top performance). At school, Megan finds one genuine friend in Nikki (Sue), she wins the affections of jock Ron (Tommy), she gains a nemesis in Charlene (Chris) and finds herself subjected to jerky teacher Mr. Anderson (Mr. Fromm). Then we have Yvonne DeCarlo playing Emelin (Miss Desjardin/ Collins /Gardener), a shopkeeper who discovers what's going on with Megan and tries to help.

In addition to the character layout, there's also the mirror, which appears to menstruate at every given opportunity, several cinematic scenes in gym class, and..

SPOILER!
The film includes the senseless stabbing of a female family member, a chick whose nose won't stop gushing plasma, and a bloody shower scene.

They even manage to directly reference CARRIE ("It's not like we're gonna dump pig's blood on her."). Even the film's memorable song, "In My Arms," bears the same sentiment as Katie Irving's "I Never Dreamed Someone Like You Could Love Someone Like Me." Director Marina Sargenti didn't quite have DePalma's cinematic panache, but there are several elaborately blocked scenes; and composer Jimmy Lifton created a memorable, truly haunting, original score which, in places, echoes Pino Donaggio's score from the original CARRIE.

Rip-off? Certainly. But it's simultaneously an above average horror b-movie.