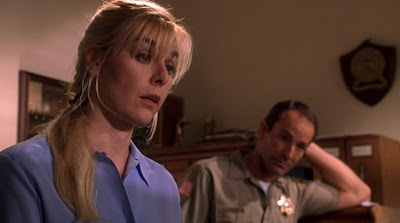 By the age of 30, writer-director KATT SHEA (Director, Deputy D.A.) was honored by restrospectives of her five critically acclaimed films at the Museum of Modern Art in New York, the British Film Institute in London and at the Oldenberg Film Festival in Germany. She also won the 1996 Silver Award for screenwriting at the Houston Film Festival. She has been profiled in a special issue of US MAGAZINE dedicated to the role of sex in entertainment and on the front page of THE NEW YORK TIMES "Art & Leisure" section, in which writer Caryn James credits Shea with starting a new genre, the "commercial art film."

Even though Shea has worked almost exclusively in the low budget independent world, her work has started trends which resonate through larger budget studio movies. POISON IVY, which was a significant video hit and boasts the highest turns per copy in video history, inspired dozens of imitators. STRIPPED TO KILL started a genre of stripper thrillers. DANCE OF THE DAMNED has been called the precursor to INTERVIEW WITH THE VAMPIRE. Andrew Sarris has praised her "kinetic talent combined with a flare fore the complex narrative. Ms. Shea does little things so well that big meanings flow out of them." Peter Travers adds, "The emotional resonance, visual sophistication and strong subtext of She's work fuse to create a distinctive style worth monitoring," describing her work as "a wild ride with the top down into uncharted territory."

She credits Roger Corman for giving her a start. She also credits her collaborators, including directors of photography Phedon Papamichael and Oscar winner Janusz Kaminsky, for much of her success. She has also been championed and acclaimed by veteran directors Sydney Pollack and Francis Ford Coppola.

Before making the move to writing and directing, She appeared in a small number of features, including SCARFACE and PSYCHO III. Her appearance as the Deputy D.A. in THE RAGE: CARRIE 2 marks the first time Shea has appeared in one of her own films.

She intermittently teaches on comprehensive course in directing at UCLA Extension and is on their Advisory Board.
Posted by Vinnie at Thursday, February 07, 2008