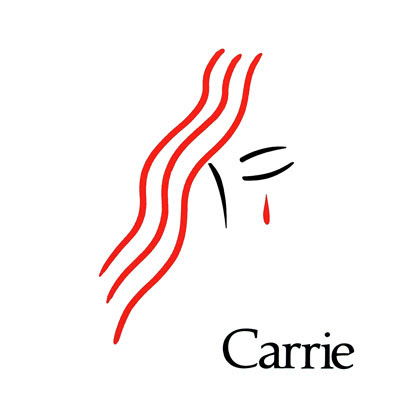 With it's continuously growing cult following, a lot of recordings and collectibles exist for the musical version of 'Carrie.' Figured it best to list them all in one place. Since most of what follows are bootlegs, track listings have a tendency to vary. If you know of additional things that should be cited, or if I've screwed something up, let me know -- I surmise there's other copies of the script and score in fandom that I don't have listed. Since there's so many different versions of the Broadway tapes (and I'm uncertain which recordings originated from which performance), I've omitted track listings on those recordings. Special thanks to Garrett for offering lots of additional, specific information, Connor Fitzgerald for pointing out John Moauro's clip of "Heaven," and sondheimboy2 for giving me some info about Darlene Love's book (which I'm gonna pick up one of these days).

To reiterate, this is merely meant to document the Carrie memorabilia that exists. I'm not offering anything on this page for sale or trade... Most of this information came from various online sources -- I personally don't own copies of many of the things cited. However, keep your eyes peeled for many clickable titles... you never know what you might find.

This page was quickly becoming monstrous (there's a lot of stuff circulating!), so I've divided it into sections:

Just to let you know that a full video of the Denmark production is also out there. I know because I have a copy

I'd die to see any of those full videos. Any link? Thanks!

Yea, Edmund. I would pay good money for a copy of the Denmark production, and if you have the recording of it I'd love that too! flyingmonkey1223@hotmail.com

I am trying to collect all known video and audio recordings of Carrie. If anyone has anything they are willing to share, please send me an e-mail! broadwayboy@charter.net
THANKS!!

MAJOR RUMOUR MILL NEWS IS TRUE!!!! Ken Mendalbaum who wrote "not since carrie" owns an ENTIRE version of the broadway show. It is both acts, but he wont release it. People get working...

This guy John Moauro sang "Heaven" and This guy can Wail! Watch it. It's well worth it!

Hi, i have the PDF versions of the Complete official scores of Bwy- Rehearsal and the Broadway Run.

Let me know if you want them

Hey, check out killoa2002 on youtube, he posts the stagedoor versions!

Oh, one more thing....I HOPE THE CREATOR OF THIS SITE READS THIS COMMENT.


AND START A REVIVAL ALREADY!!!
don't even get me started about that!!!

Check out the new recordings of And Eve Was Weak, Heaven, and When There's No One by Chris Moore from his demo album Not While I'm Around.

And Eve was Weak- http://www.mediafire.com/download.php?jxzth2ynt2j

These are pretty rare tracks are not half bad at all...quite good actually. I can't think of many other recordings of these tracks. Enjoy!

Oh my goodness, thank you so so much for this website - I have always wanted to hear some music from this show and now I am so happy! Thank you so much!

New recordings of Carrie (reprise)/When There's No One and And Eve Was Weak here:http://www.myspace.com/chrismoorealbum