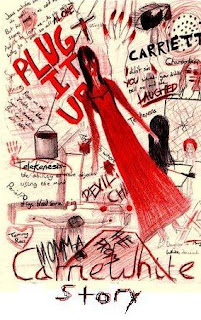 The forthcoming 'Carrie White Story' is another unauthorized stage production. The thing that distinguishes this from the other stage incarnations is that it's neither based on the films nor the musical -- it's adapted from Stephen King's original novel -- and the roles will be filled by actual teens, aged 14 to 20.

Directed by Sean Pollock, the show is slated to hit the stage for two performances on July 18 and 19, 2008 at the Darress Theatre in Boonton, New Jersey. Check out the Stage Hands Performing Arts website for more information as it becomes available.

Whatever you do, AVOID GOING TO THIS SHOW. I was originally slated as an assistant director, even going so far as to co-author the script with him. However, I was removed from the project because an actor refused to be in it unless I was removed from the position of asssistant director. I told Sean that he was not allowed to use my script, and that if he did, I would sue for plagarism. [As a writer, I have to be careful with my work]. As far as I know, he is still using my script. I refuse to attend and see if he used my ticket, as I don't want to pay $125 to see something when I could use the money for two tickets to see a broadway production. The show is immaturely written [if he has not used my script] with more than minor plot holes and grammar errors that are highly obvious. If someone does attend, please let me know how the show was.

Thanks for your time.

There are so many things I could say to you right now. I'm surprised you stooped this low. Too bad I didn't know about this until the show closed. Oh well. People still came.

was there any 'archival' documentation of this 'production???'