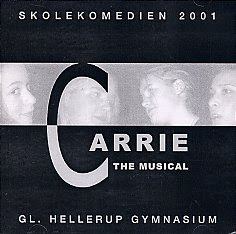 In 2001, the Gammel Hellerup Gymnasium, a high school in Denmark, mounted a musical production of "Carrie." According to info I've read elsewhere (which may be inaccurate), this was the only completely official staging of the show since it closed on Broadway in 1988 (though it's possible that there was some official sanctioning for the staging at Emerson College). An audio recording was made of the show, transferred to CD and allegedly offered for sale at the school. Apparently video footage of this show has also been leaked into fandom. Aside from the audio, I currently don't have any further information on this production.

is there any way you can send me the photos you said you saw?