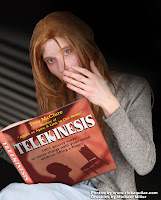 You can understand the impulse. As one ages, one's tolerance for playing to the drunk and the half-asleep diminishes. And if "Urinetown" could play Broadway, then why not "Scarrie: The Musical"?

But it's time for a few tricky truths. Some shows should remain hour-long, late-night escapades. And when your show is a camp bit of homage to the Brian De Palma celluloid classic (menstruation; high-school bullies; pig's blood; special powers; etc.), you're firmly in that category.

There's nothing wrong with that. When I first saw David Cerda's "Scarrie" in a cramped little storefront in 1998, I thought this was one of the funniest late-night Chicago shows I'd ever seen.

But see this material at the Theatre Building on a sober Sunday afternoon and, well, the atmosphere and the expectations are not quite the same. This "Scarrie" feels overstretched and a tad ill at ease. Flights of comic fancy are interspersed with scenes that don't work. Great gags get squelched by lousy ones.

Overall, you'd have to call "Scarrie" uneven, and that's rather painful to do, because it's potentially a whole lot better.

Cerda never knows when too much is too much, but he's still a major talent. And, indeed, his re-tooled, re-powered, expanded version of "Scarrie" is in many ways an admirable affair. There are more musical numbers than you'd see on Broadway, a huge, endlessly energetic cast of new young faces (some of whom, for instance Ryan Lenning, can sing, some of whom cannot), oodles of very snappy choreography and, as before, much deliciously droll meta-humor at the expense of the horror-flick genre and teen exploitation movies. Cerda's lyrics often are very, very funny. So are some of the sight gags.

There's more good news. Most shows like this fail because they camp up the material and play the joke, instead of the characters' warped truths. You couldn't lay that charge at the door of "Scarrie." The central drag performance — from the deliciously weird Joey Steakley — has more emotional darkness than "Six Feet Under." Steakley — thin, lanky post-adolescent desperation in a clingy dress — is so nervy and good, he's worth the price of admission.

And yet the scenes with Carrie's fundamentalist mother — also a drag character, played by Ed Jones — don't work at all, mainly because they move so unbearably slowly.

If only Hell in a Handbag Productions could cut the weakest half an hour and speed up the rest, "Scarrie" would be a summer classic. Especially if a tacky late-night design and ambience could be added.