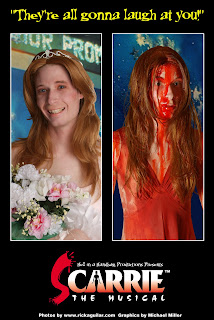 Hell in a Handbag Productions, who brought you POSEIDON! An Upside Down Musical and Rudolph, The Red-Hosed Reindeer, is proud to present:

SCARRIE – The Musical*, an unauthorized musical parodage** of the classic 70’s horror film Carrie, the tale of a high school misfit, who raises telekinetic hell when pushed too far by her peers and religious fanatical mother. This new musical by David Cerda features a rockin’ original 1970’s influenced score and lots of pigs’ blood.

“This story just resonates with me. It’s the ultimate revenge fantasy. I also truly LOVE the film… Sissy Spacek is the embodiment of what I and so many others I know felt like on the inside - she’s just wonderful, as is Betty Buckley and of course the magnificent Piper Laurie. The film is just ripe for parody”
~David Cerda, playwright/composer.
SCARRIE – The Musical opens Saturday, July 2 (previews July 1) and runs through Sunday, August 7, 2005. Performances are Thurs-Sat 7:30 PM and Sun 2:30 PM at Theatre Building Chicago, 1225 W. Belmont. Tickets are $25.00 and are available by calling the Theatre Building Chicago Box Office at 773.327.5252. Group sales are also available by calling 312.409.4357.

SCARRIE – The Musical History
The first incarnation of SCARRIE - The Musical was the late night show, sCarrie! The Musical produced by Sweetback Productions and directed by Kelly Anchors and Mike McKune (book, lyrics & music by David Cerda with additional musical arrangements by Scott Lamberty). The show opened at the Sweetcorn Playhouse (now a pricey condominium complex) in lovely Andersonville in August of 1998 and ran late night for a year and a half with Steve Hickson as the original Miss Collins, managing the run of the show and assuming responsibilities far beyond your average gym teacher.

David Cerda (book, music & lyrics) is the Artistic Director for HIAH Productions and has written and appeared in Rudolph, the Red-Hosed Reindeer, How ‘Whatever Happened to Baby Jane’ Happened, and POSEIDON! An Upside Down Musical (New York International Fringe Festival-Best Ensemble Award and most attended show). In his tenure as Co-Artistic Director of Sweetback Productions he wrote and appeared in The Birds (co-written w/Pauline Pang), Joan Crawford Goes to Hell!, the Jacqueline Susann monologues in Jacqueline Susann’s Valley of the Dolls, Touched by Jayne Mansfield, Queen of the Roundup (Lyrics and Music) and the original late night Carrie parody, sCarrie! The Musical. Cerda’s plays have also been produced in Baltimore, NYC, and Omaha, yes, Omaha. David was most recently seen as Miss Fern in Corn Production’s Tiff and Mom and The Bad Seed, the New Town Writers Solo Homo 3 and various Feast of Fools shows as an egomaniac who thinks he’s Joan Crawford.

Margot Bordelon (director & dramaturg) is a recent transplant from Seattle where she attended Cornish College of the Arts and co-founded Double Shot Productions, a company focused on producing highly stylized physical comedy. For Double Shot she directed Charles Busch’s Psycho Beach Party, and two original pieces which she authored: Call in the Family and Mystery at Camp Chestnut. She spent the 2002-2003 season at the Seattle Repertory Theatre assistant directing Copenhagen, Sugar Plum Fairy, Boy Gets Girl, and Things Being What They Are. Other credits include Ball, All the Rage and The Swimming Pool Landscape to name a few. In May, she will complete a nine month artistic apprenticeship with Steppenwolf Theatre Company.