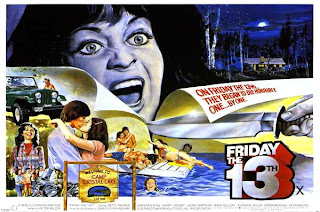 For nearly a quarter of a century, Camp Crystal Lake has been abandoned. Nicknamed "Camp Blood" by the townspeople, a young boy drowned there in 1957 and two counselors were brutally butchered in 1958. But enough time has passed since those deaths that some idiot has the idea to open the camp again... that's always a great idea! Enter a group of teenagers (including then-unknown Kevin Bacon), who are helping to restore the camp to its former glory and staying on as counselors. Unfortunately, someone doesn't want the camp to reopen, and they're out to solidify the name "Camp Blood." And no, it's not Jason.

Here's the original trailer (which, predictably, contains some spoilers):

Although FRIDAY THE 13TH is primarily a rip off of HALLOWEEN, it was one of the very first slashers with explicit gore, and it was followed by endless sequels -- plus it started a whole sub-genre of its own: camp killings. The reveal of the killer was far more shocking and original than any of the sequels, but one can't help but notice the films that laid the groundwork. The final scene, in particular, owes more than a little bit of debt to CARRIE.

While having a serene time floating along in a boat on Crystal Lake, from out of the water, Alice Hardy (Adrienne King) is attacked by young Jason Voorhees, who drowned there decades earlier. With its surreal dream/jump scare ending, it's easy to see why it's often said that the finale was ripped off from CARRIE. Here's the clip:

This opened the door for the sequel, in which Jason actually did return... and from that point on, he wouldn't die. This also opened the door for a few more CARRIE rips. In FRIDAY THE 13TH PART VII: THE NEW BLOOD, Jason squares off with a girl with telekinesis. In JASON GOES TO HELL: THE FINAL FRIDAY, there's yet another CARRIE lift. This time, it's Freddy Krueger's glove popping out of the grave and taking Jason's mask to Hell (which later segued to FREDDY VS JASON).
Posted by Vinnie at Wednesday, January 30, 2008