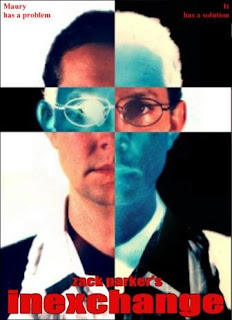 Maury (Sean Blodgett) is the ultimate introvert. Rather than rock the boat, he lets his college roommate Jay (Todd Richard Lewis) continuously take advantage of him. But Maury's world goes spiraling out of control after being lured to a college party where he's humiliated by the meathead fratboys... so he asks a creepy, cloaked, blindfolded figure to exact revenge. As the bodies pile up, Maury becomes smitten with lovely Lara (Tiffany Wilson), but even she has motives of her own...

There's nothing here that you haven't seen before, but it's admirably executed for such a no-budget film. When director Zach Parker was pitching the movie, he called it CARRIE meets PSYCHO, and that's certainly a fitting description. Isolated Maury leads a very Carrie-like existence, and the prank... let's just say it hearkens back to CARRIE, and it made me squirm. Very little makes me squirm. If you can forgive the fact that it's shot on video, some of the acting's bad, the sound's tediously uneven, and that it moves at an intentionally Kubrickian snail's pace, you might find something to like about INEXCHANGE. At the very least, it's markedly better than any other shot-on-video, cheapie horror film I've ever seen (trust me, I've seen way more than a few), and I've found myself pulling out the DVD more than a couple times. I'd be interested in seeing what Parker could do with a real budget.

Here's the trailer. Predictably, it's marketed as a hardcore slasher, though that's not really the case. Yes, it has its brutal moments, but it's neither as fast paced nor as gratuitously gruesome as this trailer implies. Oh yeah, and the trailer contains SPOILERS!

BACK TO CARRIE CONNECTIONS
Posted by Vinnie at Wednesday, January 30, 2008

Vinnie,
Thanks for the mention about INEXCHANGE. It is really surreal to see that people out there are still discovering this little film of mine. And although I agree with you on some of the technical hurdles we had to deal with, it sounds like you enjoyed the film overall, and understood what we were going for.
I am happy to say that I had a little more money to work with on my second feature, QUENCH, which we shot on HD. The film is currently playing the festival circuit, and should be released later this year. If you happen to get the chance to check it out, I think you will find that it is a bit more unique, and a superior film to INEXCHANGE on many levels.
Thanks again,
-ZP
P.S. I agree with you about the trailer, the Distributor forced me to cut it that way. I believe their words were " Make it look like a kick-ass horror film."

Several years back, you posted about INEXCHANGE on the CARRIE message board on imdb... and later that very same day, your post vanished. I bought the DVD a few weeks later. I initially had a hard time getting into it because of the plodding pace (which is not at all what I expected from the trailer or a movie distributed by Brain Damage Films) and the uneven sound but I was impressed with the visual style and Blodgett -- by the end I was really rooting for Maury (admittedly I saw the twist coming but I loved the execution of the final scene so much that it didn't matter).

I'd planned a section of my CARRIE site for rip-offs, references and similar films for years but I had constant problems with the site until I moved it to blogspot. When I finally got around to starting this section, INEXCHANGE was one of the first films I re-watched.

While looking for photos to use here for INEXCHANGE (I guess there weren't any?), I found the Along the Tracks page for QUENCH. Living in bumfuck nowhere, I rarely get the chance to attend film festivals but I'm looking forward to snagging a copy when it hits DVD.

I hope you get a chance to check out QUENCH too.

Thanks for helping to keep true indie films alive.

Been a while, but I thought I would drop by to let you know that QUENCH will be released everywhere on DVD on the 28th of this month. Hope you get a chance to check it out!