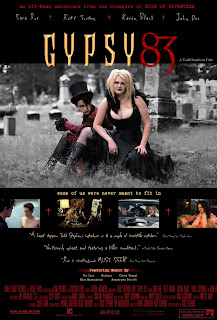 Goth girl Gypsy Vale (Sara Rue) hates her life in Ohio and dreams of becoming a successful singer like her idol, Stevie Nicks. So she and her virginal gay best friend, Clive (Kett Turton) head off to New York, where she can participate in the annual 'Night of a Thousand Stevies' ball. Along the way, there's a few bumps in the road -- which come in the forms of a washed up lounge singer (Karen Black), an Amish runaway (Anson Scoville) and a closeted fratboy (Paulo Costanzo). All in all, it's a touching little dramedy with a great soundtrack. Sadly, problems with poor distributors of the film found the film dumped on video where it's remained largely undiscovered. 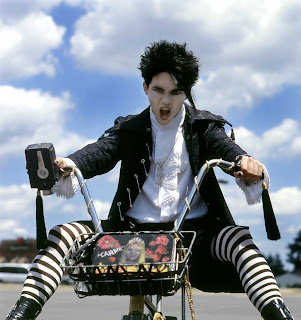 So for the CARRIE reference... Kett Turton is frequently seen sporting a custom, seemingly homemade tin lunchbox (seen in the photo above) with the flame-surrounded word "Carrie" adorning one side, and Sissy Spacek's mug adorning the other. Here's two brief clips from the film where you get a good view of it:

Writer director Todd Stephens paid a bigger homage to CARRIE in his next film, the gross-out comedy ANOTHER GAY MOVIE.
Posted by Vinnie at Wednesday, January 30, 2008

This is an amazing movie! I love it! if you havent seen it, go to amazon.com and buy it. $10 is definately worth it for this amazing movie, 5 stars!