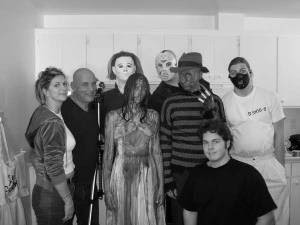 Jordan A. Crowder's HORROR FRIENDS was shown at Montréal's Short Film Festival, "Glitchfest 2004," and shortly thereafter, it began feverishly circulating amongst horror fans on the internet. Although realistically, this wasn't that long ago, it was before YouTube and flv video became the norm, so people who wanted to see it had to download the video file. And download, they did! It was among the first home-made, online videos that truly became a sensation.

HORROR FRIENDS is a 9-minute spoof of the television series "Friends" starring a cast of '70s and '80s movie villains. Most of the big ones are here: Freddy Krueger, Jason Voorhees, Hannibal Lecter, Michael Myers... and O.J. Simpson! Carrie White's part is late in the film, but nonetheless crucial to the plot.

So below is the film; gag reels, bloopers, behind the scenes and still photos are available on the Horror Friends Site (they're also buried on Crowder's YouTube page).