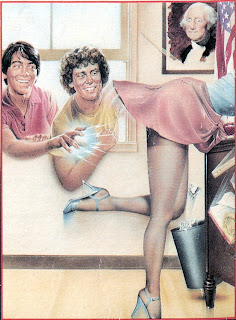 The 1982 film ZAPPED! holds the distinction of being the one movie that absolutely could not have been made if not for CARRIE. The goofball sex comedy is a one of a kind spoof and it quickly became a beloved cult favorite. 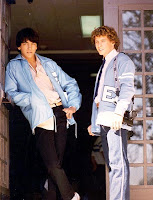 Barney (Scott Baio) is a girl-crazy, dope-growing young scientist whose latest experiment goes awry... and results in him gaining telekinetic abilities. Best friend Peyton (Willie Aames) tries to exploit Barney's powers for his own personal gains, and aspiring girlfriend Bernadette (Felice Shachter) wants to scientifically document her findings on his newfound abilities. Barney, however, has his own ideas about how to best use his new gifts.

For starters, he uses his telekinesis to put the jocks who torment him in their place. In lust with smoldering sexpot Jane (Heather Thomas), who won't give him the time of day, Barney also uses his powers to sneak a peek under her clothing. Unfortunately Jane is dating beefy fratboy Robert (Greg Bradford), and Robert's not too keen on Barney and Peyton's overwhelming interest in his girlfriend. Barney's coach (Scatman Crothers) takes an interest in the boy, and gives him advice on how to get laid. At home, Barney's loopy mother (Mews Small) becomes convinced that her son has been possessed by the devil.
SPOILER (of the film's most beloved and remembered scene)
The film culminates at the Senior Prom, where a blow to the head (with a watermelon!) causes Barney's powers to short circuit, which results in him telekinetically ripping off the clothes of all of the prom goers. This scene tapped into a lot of male fantasies, resulting in the film's continued cult popularity. Seriously, is there a man alive who wouldn't rip the clothes off of everyone in sight if given the opportunity? I didn't think so... unless, of course, the telekinetic in question was at a nursing home or a Weight Watchers meeting... 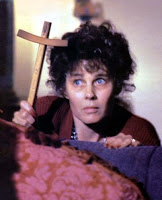 The film features more than ample originality to keep it from being a poor, all-out rip-off, though the CARRIE connection is unmistakable (it was later amusingly described in an Entertainment Weekly article about essential teen sex films as "CARRIE with a boner"). Along the way, the film also manages to spoof and reference few other popular films, most notably STAR TREK and THE EXORCIST.

Another link to between ZAPPED! and CARRIE is Scott Baio's current manager, Harry Gold, who played Tommy's best friend George in the 1976 CARRIE. And if you want to push a connection to CARRIE even further... two of the most memorable songs in the film, "Got to Believe in Magic" and "The King and Queen of Hearts" were written and performed by David Pomeranz, who wrote the song "Old Home Town," which was recorded by Sissy Spacek the following year for her album "Hangin' Up My Heart." The Philippines CD release of "The Best of David Pomeranz" featured the two songs from ZAPPED! as well as his version of "Old Home Town," which was first released on his 1981 album "The Truth of Us" (man, that was useless trivia!). For TV fans, ZAPPED! is also significant for the Scott Baio/Willie Aames pairing that continued through the hit series "Charles in Charge."

Here's the incredibly rare trailer, courtesy of the ZAPPED! movie group (major kudos and thanks to the manager of that group for converting his personal print!!): 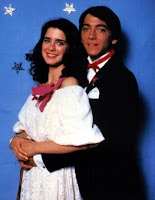 Arriving at theatres in the megahit-filled summer of 1982 during the sex comedy explosion (and after quite a bit of time had passed since CARRIE), ZAPPED! failed to attract many moviegoers and quickly faded away -- audiences were far too captivated by an extra terrestrial with a glowing finger and Dustin Hoffman in drag. However, the following year the film premiered on home video and HBO, where it began to build an audience. Throughout the '80s it received steady airplay on cable stations, which eventually led to a straight to video sequel titled ZAPPED AGAIN!

ZAPPED AGAIN! follows the exploits of Kevin, the new kid in town who joins the science club. Before long, he discovers a potion hidden away in the school by former alum Barney, and he acquires his own telekinetic abilities. None of the original cast and crew returned for the movie, and it's nearly wholesome when compared to the first film (some think the latter is a plus; many find it a detraction). Easily the biggest gripe is the illogical, clumsy ties to the original. For fans of CARRIE this one's hardly worth noting because, aside from the telekinesis, there's no other connection.

After years of gripes and online petitions from the many fans, MGM finally got around to releasing ZAPPED! on DVD in February 2008. ZAPPED AGAIN has been available on DVD for quite some time. It's worth mentioning that the beloved soundtrack for the first film was put out on vinyl and cassette to coincide with the release of the film and then, in 1996, it briefly surfaced on CD in the Philippines. Each of these releases were ludicrously limited and have always been hard to find, but mp3s from the CD are circulating all over the net.

If you're a fan, make sure to check out MSN's ZAPPED! movie group, a massive, long-established fan site for the films. Though the main focus is the first film, there's a small portion of the site devoted to the sequel.

If you are looking for the Zapped soundtrack, write me at phaota1@fastmail.fm.

The Zapped! Club has now found it's home on facebook:-