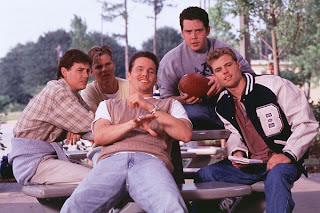 Like most films aimed at teens from the late '90s, THE RAGE featured a wide array of music in addition to the score by Danny B. Harvey. A soundtrack was released (now out of print) which was a "from and inspired by" album featuring a bunch of songs that weren't in the film (and omitting many that were).  Harvey's score was never issued on disc but, for a time it was available for download from his official website.  In other words, fans got screwed on the soundtracks.

So here is the virtually complete soundtrack and score for the film, with special thanks to Pop Tate for tracking down some hard-to-find tunes!  All that's missing is the song "Treat Your Mama Right" by Dan Shea, which doesn't seem to have been released at all.

Thank you. This is such a wonderful blog. I've been looking for the soundtrack score of The Rage: Carrie 2 for years.

Do you happen to have the mp3 of the music where Rachel falls on the floor and gets laughed by everyone at Mark's party? It's when everybody sees the tape of her and Jesse having sex?

Anonymous, if it ain't in the download above, I don't have it.

Vinnie, do you happen to know what it is and where i can find it?