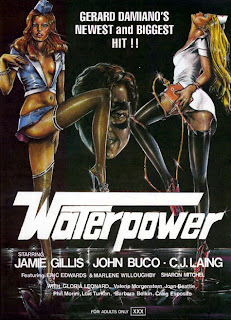 The narrative is a surprisingly effective, low-budget, rip-off of TAXI DRIVER, and the film was allegedly shot in a few days (which is extremely difficult to believe, given the numerous locations, scenes and set-ups). B-Movie/porn star Jamie Gillis takes the lead role of a Burt, a man who goes to The Garden of Eden brothel, where he witnesses a weird fetish that excites him, so he ultimately ends up, um, brutally cleansing and raping women. 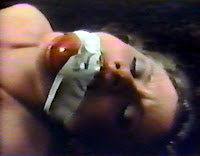 I do have to say that I miss the days when film posters were actually works of art, even if they were for obscure, unsavory, X-rated movies.

Anyway, the connection to CARRIE, slight as it is: As Gillis walks down the New York streets, he passes a theatre with a massive display for CARRIE. Obviously this wasn't set-dressing or meant to be a direct reference (it's not like he growled "They're all gonna laugh at you" as he administered high colonics), it actually just happened to be playing at a theatre on a street where they filmed Gillis walking. The interesting thing is how elaborate the display appears. It surrounds the doorway -- there's huge photos of Spacek and Laurie, and the enormous logo above the ticket booth looks pretty cool. Unfortunately, you don't get more than a poorly-lit, way too close, fleeting glimpse of it, which is a shame (whoever spotted it and submitted it to imdb must've had an eagle-eye). Still, it's a rare glimpse at the marketing of a film in a long-gone, pre-home video era. Here's the clip:

Also notable, director Costello had a penchant for lifting musical scores from other films (Pino Donaggio's "Bucket of Blood" track from CARRIE was later used in Costello's 1980 film AFTERNOON DELIGHTS). Strangely, he never got sued for the unauthorized musical lifts. For WATER POWER, he used portions of the score that Bernard Hermann composed for Brian DePalma's SISTERS.

Where can i get a copy of waterpower? email me videodrome88@yahoo.com, thanks. Is the one you have the uncut version or the heavily edited one?

Hi there, I am looking for Waterpower stills, scans, images, posters etc for FILMRAGE magazine. www.filmrage.co.uk. Good prices paid, or scans will do. Thomas