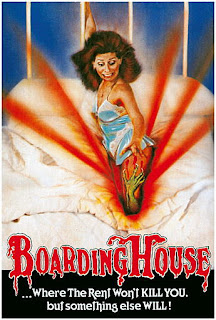 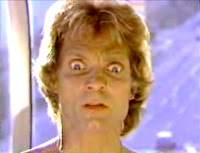 If you can make it through the opening credits and prologue without committing suicide or ripping the speakers out of the TV/computer, you might like the gruesome BOARDINGHOUSE (aka HOUSEGEIST) for its sheer stupidity. That is, if you have an appreciation for outlandish gore and lots of nude/nearly nude men and women. It's utterly goofy and holds the distinction of being the first horror film released that was shot on video (and the only film released in Horror-Vision!). 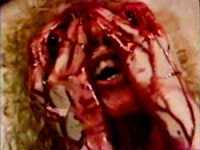 '80s studmuffin Jim Royce (writer/director/star John Wintergate) spends his days lounging in his undersized briefs, making his plants move with the power of his mind (and the aide of a small, off-screen fan). But those days are soon through when he opens up a boardinghouse at the scene of a series of murders, and invites a slew of nymphets to live with him. Soon they're disrobing at the drop of a hat, and we're treated to an endless barrage of tits, blood, terrible acting, hokey Halloween masks, atrociously '80s musical numbers and the slaughtering of an innocent cat. Whoever's committing the murders seems to have telekinetic powers, so is it Jim... or someone else? Let's just say that the killer is not who you'd suspect... 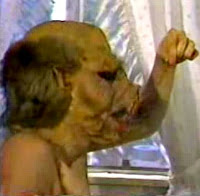 It could be speculated that there were several lifts (or at least ideas that spawned) from CARRIE. For starters, there's the telekinesis, but CARRIE was hardly the first story to delve into that area (though it did popularize it). During the girls' frequent hallucinations, they see someone clad in a gruesome pig mask. Pigs' blood, pig mask -- coincidence? Then there's the part (pictured above), where a woman smears he bloody hands across her face as she... never mind, watch it. But the scene is sort of Spacek-like. One scene shows a girl awakening from a vivid nightmare, so she screams... and screams... and screams.... Maybe I'm pushing it with that one, but an anonymous person recommended I add this title to the list... though in places, I can certainly see why they'd make the connection to CARRIE.

Here's the trailer which contains graphic gore and SPOILERS:


Elsewhere I've read that BOARDINGHOUSE is due out on DVD in 2008, and it includes a commentary with Wintergate and his wife, star Kalassu. For the moment, it's available to watch on You Tube.
Posted by Vinnie at Wednesday, January 30, 2008

Here's the anonymous comment that was left on another page on Feb 2, 2008:

On Youtube, there's a direct-to-video movie called Boardinghouse. Basically, it's about a house that is supposedly haunted and past owners have died unusual deaths. A guy then buys the house and begins to experiment with developing telekinetic powers. One of the women living in the house is also shown this vis levitating a bar of soap while the guy is in the tub taking a bath. Could this also be included in Carrie Connections?