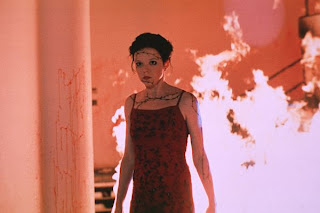 Entertainment Weekly
Movie Reviews
March 19, 1999
A belated sequel to the high school horror classic, The Rage: Carrie 2 slays in all the right ways.

''It must be nice not having to be like everybody else,'' says the gentle football-star hunk to the brooding class misfit, and anyone who survived high school knows such words could be spoken only by one of the Beautiful People, earnestly peering down through the hierarchy. It's to the credit of The Rage: Carrie 2 that the girl to whom he's speaking knows he's being deeply fatuous and is still drawn to him, both for who he is and what he represents.

Twenty-three years after Brian De Palma, via novelist Stephen King, took a telekinetic ax to Bates High School, do we really need a Carrie sequel? Especially when that film's star, Sissy Spacek, has resurfaced playing a dithery June Cleaver mom in Blast From the Past? Of course not, and it's beside the point; what matters here, as with last year's Halloween: H20, is reviving a once-potent horror brand name in the post-Scream era. And in that context, The Rage: Carrie 2 is better than it really deserves to be.

The most satisfying change writer Rafael Moreu (Hackers) and director Katt Shea (Poison Ivy) have made is to their heroine. Where the original Carrie White was a sheltered, cringing wallflower, Rachel Lang (whose relationship to Carrie is a mid-film secret I won't spoil) is a foster-home Goth grrrl: pale, defiant, seething with surface-level cynicism. She's the antithesis of the glamorous faux nerd played by Rachael Leigh Cook in She's All That, and newcomer Emily Bergl portrays her with a nicely sulky empathy, equal parts hurt and hope.

Rachel's telekinetic powers, in fact, are something of an afterthought; Moreu and Shea seem far more interested in charting her relationship with the football hunk (Jason London) than in nudging them toward the gory showdown we've all come to expect. The filmmakers cave eventually, of course. Filmed with stylish pop portentousness, The Rage throws in a jock-clique sex contest reminiscent of the Spur Posse, sole Carrie survivor Amy Irving as an emotionally wobbly guidance counselor, and witty soundtrack gags like Billie Holiday's ''God Bless the Child'' and Mono Puff's ''Backstabbing Liar'' -- but ultimately, it comes down to dismembering the senior class in cruel and, all right, entertaining ways.

Which is what both King and De Palma were on to in the first place: that primal adolescent urge to blow high school sky high. But where Carrie White laid waste to her senior prom -- the perfect, powerful symbol of teenage caste -- The Rage contents itself with trashing a rich kid's house. By that point, anyway, the film has surrendered to genre. Despite what the football hunk says, this Carrie is just like all the rest. B- 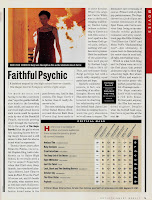