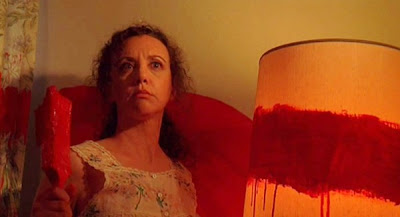 J. SMITH CAMERON (Barbara) recently starred in the lead role of Alexa Vere der Dever in an off-Broadway production of "As Bees in Honey Drown," for which she received an Obie Award and was nominated for both an Outer Critics Circle Award and a Drama Desk Award. She just wrapped a run at the Manhattan Theatre Club where she played the lead role of Catherine in "Memory of Water." She was a Tony nominee as Best Featured Actress for her work in "Our Country's Good." She also earned an Outer Critics Circle Award as a member of the ensemble in "Lend Me a Tenor."

Smith-Cameron's feature film credits include In and Out, Harriet the Spy, The Proprietor, Sabrina, Mighty Aphrodite, Jeffrey, and 84 Charring Cross Road. She has guest starred on numerous television series including Spin City, Homicide and Law and Order.

Among her other Broadway appearances are "The Play's the Thing" and "The Real Inspector Hound" for director Gloria Muzio, as well as "Wild Honey" and "Crimes of the Heart." She also received a Drama Desk nomination as Best Featured Actress for "The Naked Truth" at the WPA Theatre.
Posted by Vinnie at Thursday, February 07, 2008