Carrie the musical at Emerson College 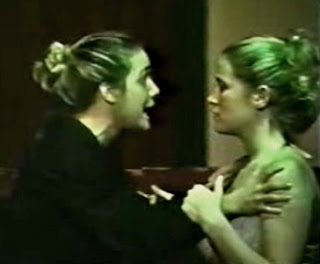 Sometime right after the turn of the century (I presume), two unauthorized performances of Carrie the musical were staged at Emerson College in Boston, Massachusetts. Using the Broadway version as the jumping off point, this version was considerably reworked -- no glitzy over-staging, frantic choreography and ridiculously campy sets. The Emerson version featured one set. The script incorporated portions of both the Broadway and Stratford versions as well as dialogue from the script for the '76 film (including one pivotal scene that was cut out of the movie which replaced "Don't Waste the Moon" and was used to lead into "Do Me a Favor"). The "Apologies" scene was replaced with the film's detention scene; "It Hurts to Be Strong" was replaced with Stratford's "White Star;" "Do Me a Favor" was sandwiched around "Unsuspecting Hearts;" and "Heaven" played out as one long song that included the reprise (complete with Margaret White, who was cut out of the song after the Stratford run). And I gotta say, they got it right... almost. 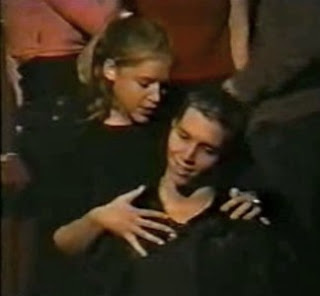 While I have to applaud them for restoring the story structure that was so badly garbled in the Broadway version, there's one area where this version was still lacking: Carrie's telekinesis. The shattering light bulb during Carrie's period is absolutely crucial to that aspect of the story but was omitted. No library research on the word "telekinesis," no shattering mirror. During "I'm Not Alone," instead of making objects fly around, Carrie has a fantasy sequence complete with dancers. During "The Destruction," Carrie merely points and leers at her peers and they fall down dead. The one and only special effect (other than the bucket of blood, which was actually a hanging bucket in this staging) comes at the end of the first act when Carrie makes a cross fall off the wall. Once again, audience members unfamiliar with the basic storyline would be clueless.

Forgiving the T.K. aspect (and the fact that it has the production values of a school play), this version is quite admirable. You can watch the complete performance right here.