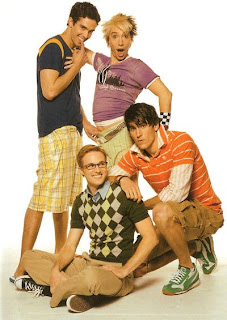 As the title suggests, ANOTHER GAY MOVIE is a gay spoof in the same vein as NOT ANOTHER TEEN MOVIE. Unlike TEEN MOVIE, GAY MOVIE really only focuses on spoofing one film: AMERICAN PIE. However, writer/director Todd Stephens obviously has an affection for CARRIE -- it was even referenced in his previous film, GYPSY 83. Although I found GAY MOVIE pretty unsavory as a whole (though many disagree), it features such a loving homage to CARRIE that I can't completely hate the film.... though they do go for a cheap gross-out at the very end of the scene.

So here's the set-up: Griff (Mitch Morris) is in love with his best friend, Jarod (Jonathan Chase). Friends their whole lives, Jarod hasn't noticed Griff's feelings for him (despite the fact that they're both openly gay, go figure). So Griff dreams that he's Carrie White and Jarod is Tommy Ross. Be forewarned that the scene is very gay -- and I mean that in all three ways the word can be interpreted (though there's no nudity, as the screencap below might suggest)... Here's the clip: