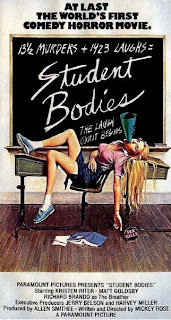 "This motion picture is based on an actual incident. Last year 26 horror films were released... None of them lost money."

Decades before we had the moronic Wayans-fest known as SCARY MOVIE (and all of its sequels), spoofs of horror movies were going strong. Unfortunately, most of these spoofs were even lower budget than their low budget counterparts... As a result, most of the older ones are unavailable on DVD (PANDEMONIUM, WACKO, etc.), but they're still beloved by the horror fans who saw them back in the day... Amongst the very first is STUDENT BODIES, which stars a cast of people you've never seen before or since.

The villain of the film is known as "The Breather" (guess why?), and he likes to lurk in ladies' lockerrooms and kill people who have sex. The prime suspect (after the initial prime suspect becomes body #12) is virginal Toby Badger (Kristen Riter), who goes to great lengths to prove her innocence. The whole film is ridiculously absurd, from its surprisingly good bad acting, to its corny spoofs, to its running body count... but there's also something hilariously charming about it. It's little wonder that it's become a cult favorite, and it's a shame that it's so hard to find.

Although there's a few scenes that could be considered call-backs to CARRIE (namely those in the girls' locker room), the biggest one occurs during the nonsensical finale. Be forewarned that there's a BIG SPOILER here:


The film is amongst those unavailable on DVD, and copies of the '80s VHS release are pricey. At present it's available in nine parts on YouTube (but anyone who knows that site knows it could be gone in an instant).
Posted by Vinnie at Wednesday, January 30, 2008

Student Bodies is on dvd as well as Blu ray.