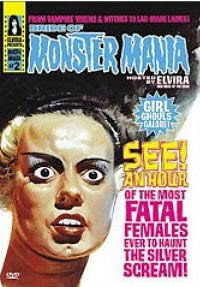 In 1999, AMC premiered the original special BRIDE OF MONSTER MANIA. Hosted by Elvira Mistress of the Dark (Cassandra Peterson), the documentary/retrospective was a showcase for women in horror movies. For the most part, however, the films featured were obscure black and white b-movies. As a clip show, it's decent enough, but they obviously couldn't secure the rights to show scenes from a lot of the films (most of the footage shown is from the trailers which have lapsed into public domain), and most of the commentary is provided by psychologists, not anyone actually involved in the films or the film world in general. The special is now available on DVD -- if you're a fan of old b-movies, it's at least worth a rental.

Towards the end of the special, the trailer for CARRIE is shown nearly in its entirety, and there's a brief comment on it. Hardly worth seeking out solely for CARRIE. Here's the clip: