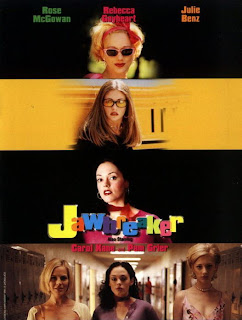 Three girlfriends (Rose McGowan, Julie Benz, Rebecca Gayheart) plan a birthday prank for their dear friend Elizabeth (Charlotte Ayanna), but the prank backfires when Liz chokes to death on the jawbreaker she was gagged with. The girls try to cover up their accidental crime, but they're busted by geeky Fern (Judy Greer), so the popular girls invite Fern to join their clique. But before long, personalities clash, friends are disowned and the police begin to investigate Liz's death... This goofy, campy, dark comedy was a hit in 1999 and it quickly gained a cult following.


Though JAWBREAKER has been pigeonholed as a rip-off of HEATHERS, there's quite a few ties to CARRIE. For starters, the ill-fated Elizabeth Purr, who's chokes on a jawbreaker during the opening sequence (and then has a great deal of screen time as a corpse), is portrayed by Charlotte Ayanna, who played the villainous Tracey in THE RAGE: CARRIE 2. Further pushing the connection, her parents are portrayed by William Katt and P.J. Soles, who both starred in the 1976 version of CARRIE. Unfortunately, Katt and Soles were nearly chopped out of the film. Apparently their big scene (the discovery of their daughter's body) was deemed too dark by the powers that be at the studio, so it was cut out -- you get a better look at them in the trailer than in the movie itself.

Fern Mayo (Judy Greer) is sort of Carrie without the magical powers. An ugly duckling turned swan, Fern begins the film dressed and looking more than a little bit like Sissy Spacek in the 1976 CARRIE. Writer-director Darren Stein even admitted that this scene was meant to be a homage:

Late in the film, after Courtney's gone psycho and disowned her friends, Fern makes a direct reference to CARRIE while plotting a course of action:

And then there's finale of the film... Click below to reveal spoilers.

SPOILER!
In the final scene, as Courtney (Rose McGowan) is being crowned prom queen, it's revealed to the entire student body that she killed Elizabeth. Suddenly the crowd turns into a mob, berating her and pelting her with corsages as she breaks down. Though hardly a bucket of pig's blood, the scene has a similar "they're all gonna laugh at you" vibe. The scene also begins and ends in slow motion, though it's nowhere near as elaborate as DePalma's staging in CARRIE.