THIS SECTION IS UNDER HEAVY CONSTRUCTION 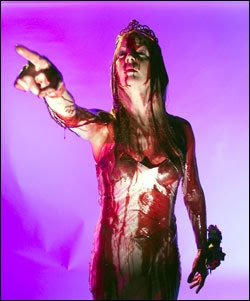 Since the introduction of the film version of CARRIE in 1976, Stephen King's prom queen has become an indelible part of pop-culture. She's been spoofed, referenced and blatantly ripped-off in everything from stage plays (CARRIE WHITE THE MUSICAL) to well-known films (KNOCKED UP) to obscure television shows ("Life's Work"). In particular, CARRIE's biggest influence seems to be on the slasher movies that exploded in popularity shortly after the film's release -- suddenly it was no longer the leering psychopath out to get random victims, it was teenagers getting slaughtered by the kid who they scorned.
For me to cite every reference would be downright impossible, but I figured I'd put up a section devoted to some of the big ones, and even a few small ones that I know of. Most of what follows is from film and television. On the individual pages, you'll find photos, summaries, video clips and trailers from the projects, as well as information on how they relate to CARRIE.

If you know of another reference that's easily obtainable (I'm not paying big bucks for old, out of print VHS releases), let me know.

Carrie has left a big impact on film directors. Carrie was one of the first high school "Ridiculed" films at that time, and i believe that it is also a classic, and is the reason why Stephen King a star.

If your still looking for the american dad spoof, you can check whole episodes on veoh.com
They have the episode Haylias which has a scene similar to Carrie, but I don't know if they have the one with the bucket of "Pigs"

Another movie that contains multiple Carrie connections is "Never Been Kissed" starring Drew Barrymore as Josie Geller... When she melts down at the prom and storms out, her brother Rob (played by David Arquette) says, "Wow, that was just like 'Carrie'! I thought she was gonna kill us all."
Josie Geller is a newspaper copy editor assigned to research information on social dynamics in high school. She hopes not to repeat her original high school years as a social outcast.
Of course, Drew Barrymore played another lethal Stephen King damsel, Charlie McGee, in "Firestarter."

You should also check out Be Kind Rewind. About a third to halfway through the film, there's a montage of Jack Black, Mos Def, et al. remaking all of the movies that they accidentally erased, and they paid tribute to our favorite prom queen. I believe the line was, "Hey! This is ketchup! You told me you were gonna use cherry kool-aid!"

In any case, it was a magical moment.

30 Rock this week did a parody of Carrie at Tina Fey's character at her high school reunion. Her ex-classmates decided to "'Carrie' her" by electing her... something, I can't remember, complete with slo-mo, flute music, and Alec Baldwin trying to run to the stage. (It ended with the bucket missing and Tina Fey basically saying "screw you guys!" and leaving.)

The movie 'POWDER' is also very similar to 'CARRIE'. I'm surprised that the movie didn't make it in your list.

I have alot of information on "Stephen Kings Rose Red" if you need it.

Italian nunsploitation movie The Other Hell was influenced by Carrie, at least towards the end. I won't spoil it. http://www.imdb.com/title/tt0080362

Very surprised not to see Richard Franklin's "Patrick" up here! It's a minor Ozploitation classic about a telekinetic youth who falls into a coma after killing his mother and her lover; the fact that he spends the ENTIRE film comatose (pity the poor actor who played him) doesn't stop him from wreaking havoc when he falls for a kindly young nurse. It was featured recently in the excellent documentary, Not Quite Hollywood, and as a result has quite the handsome DVD package to its name: http://www.michaeldvd.com.au/Reviews/Reviews.asp?ID=8645