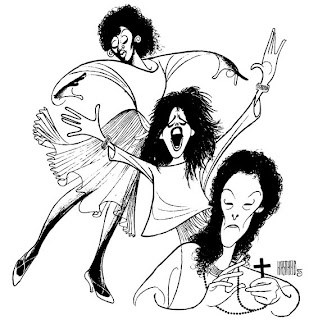 If you'd like to look at the lyrics, click the appropriate titles below or click here for all of the lyrics. Credit where credit's due: some of the lyrics were swiped from the Unofficial Site for Carrie the Musical, but the site didn't have lyrics for all of the songs.... If you spot an error/omission, or if you've got lyrics that I don't, lemme know. These are the lyrics for the Stratford and Broadway versions; I only have one track from the original workshop, so I haven't included lyrics for that version.

Bear in mind that the script was changed on a daily basis, so some of these lyrics may be slightly inaccurate when compared to the recordings -- particularly comparing them to the RSC stagings, which underwent the heaviest rewrites. I've added a separate listing for "Crackerjack," which later became "Out for Blood."
01. In
02. Dear Lord
03. Dream On/Somebody Should Have Told Her
04. Carrie
05. Open Your Heart
06. And Eve Was Weak
07. Don't Waste the Moon
08. Evening Prayers
09. Unsuspecting Hearts
10. Do Me a Favor
11. I Remember How Those Boys Could Dance
12. Crackerjack / Out for Blood
13. Dream On (Reprise)
14. White Star / It Hurts To Be Strong
15. I'm Not Alone
16. Carrie (Reprise #1)
17. When There's No One
18. Wotta Night
19. Heaven
20. Heaven (reprise)
21. Alma Mater
22. The Destruction
23. Carrie (Reprise #2)

If you're interested I think these are the lyrics to "wotta night."
Good song but the lyrics don't really say much.

I have the lyrics for the Destruction.

Chris: Now Billy! NOW!
(Screams)
Carrie: Ohhhh! IT'S BLOOD!!!
Why'd they Laugh, When They Know I'm Crying? Mama Says "Everybody Sins"
Chris: There's the Curse! Carrie's Got the curse!
Carrie: God made Eve from Adam's rib and Eve was weak. And Eve was Weak! "His Name's Tommy Ross, He's a Very Nice Boy!" Hopes and Dreams Can Vanish With the dawn. And God Made Eve to bear the curse, the curse of Blood. "He's not like Other Boys!" The curse Of Blood.
(Billy Grabs Carrie from behind and spins her around, Throwing her to the floor)
They make fun of you, then they break your heart, then they laugh at you, watching you fall apart.
(Billy grabs Carrie again and brings her Center Stage)
Doesn't anybody ever get it right!?!?!? Doesn't anybody think that I Hear?!?!?
God has seen your sinning just beginning, pray for your salvation from damnation! Pray or he will burn you! He will burn you!
(A Plastic screen drops on the stage trapping the students. Sue Snell is on the opposite side giving the illusion that she is witnessing this entire thing from outside. Each Time Carrie extends her arm, another student dies. Finally when they're all dead. The Roof Collapses bring the school stairs down. Carrie's Mother descends that starcase."

There is also a video if you would like to view this song on stage.

I have the lyrics to evening prayers and i remember how those boys can dance, in turn taken from a geocities site that is now gone. However, the formatting for prayers won't let me post it here. can i email it to you? or i could post it at multiply?

actually, i uploaded the lyrics, take a look and see what you can do if you want.

By the way I contributed Act One of the script to the unofficial site you reference above. It includes all dialogue (or lack there of) and lyrics to every song in the first act. Robbie's fan site is no longer active so you may take it to use if you like.

The direct link is here http://www.graiai.com/carrie2/broadway/script.pdf

Just credit Justin Potter or you can use my myspace link if you like.

Hope that helps, it is complete and thorough. Listening to all of Act One and transposing every line to paper took a long time. HA!

Actually, Justin, I did have your script linked here for a couple months -- I swiped some of the content from the site after it vanished (though I credited it, of course). Then I got an email that said the site would be returning, so I took down all of his content (except the caricature above, which I just couldn't bring myself to part with). It's not active yet, but the new address is carriethemusical.com

Well, even if the site does return you still have my permission to use the script if you like. Your site provides quite a bit more information than I have ever seen online.

I just read it again last night and thought to myself, damn I was dedicated. I had forgotten that I even went so far as to write the stage directions!

hi guys, I have the Complete score of Carrie in PDF and the libretto! if you guys want it, just let me know

Hi, this is for julianlrent, i am very intrested in the complete score and the libretto. If you could, please send to oisinselkiewater@yahoo.com
Thanks,
SZS