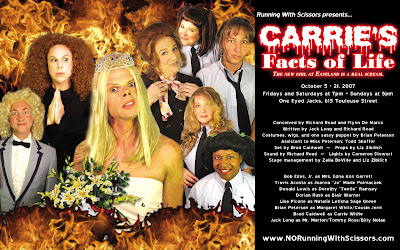 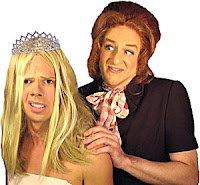 In 2007, a New Orleans based theatre troupe named Running With Scissors mounted yet another spoof, though this one was quite different from the others... it's a hybrid of CARRIE and the 1970's-80's hit sitcom THE FACTS OF LIFE. Nine performances were staged between October 5-21, 2007.

Here's an excerpt from their website about the production:

Join Running With Scissors as they stumble back a few decades to the ivy-covered halls of the Eastland School, home to Blair, Tootie, Jo, Natalie, and their spunky supervisor, Mrs. Garrett. It’s late in the spring semester, and the girls have just one thing on their minds: hot dates for the senior prom! But it’s when part-time housekeeper/full-time proselytizer Margaret White moves into the attic with her telekinetic daughter, Carrie, that things really start to heat up!

Will Blair be, like, totally banned from the prom? Will Natalie confess her true feelings to Jo? Will Tootie ever take off those damn rollerskates? And, um, what’s the deal with Cousin Jerri? Tune in this October and find out!

Carrie’s Facts of Life was conceived by Richard Read and Flynn De Marco and written by Jack Long and Richard Read. Wigs and costumes by Brian Peterson. Sets by Brad Caldwell. Props by Liz Zibilich. Technical assistance by Zalia BeVille and Cameron Stewart.