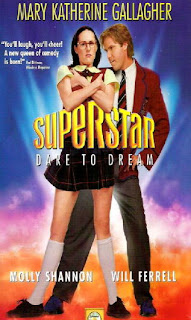 The 1999 comedy SUPERSTAR is another in a long line of TV to theatrical film spin-offs from "Saturday Night Live." Molly Shannon reprises her role as Mary Katherine Gallagher, a dorky girl (that may be mentally challenged) who tells everyone she's gonna be a "Superstar!"

Stuck in Catholic school with a lot of other 30-somethings portraying teenagers, the soft-spoken Mary Katherine has few friends. She dreams that someday she'll be a "superstar" in films, because she feels that's the only way she'll ever be able to kiss a boy -- and she's got her eye on dreamy Sky Corrigan (Will Farrell), who's currently dating bitchy airhead Evian Graham (Elaine Hendrix). This drive to be a superstar leads her to want to try out for the school's talent show, but there are plenty of bumps along the way.

There's several references to CARRIE in the movie. At the video store, Mary Katherine is employed as the rewind girl, and she spends her days watching films in reverse for research. And one of her favorite films is CARRIE -- they even show her watching it... and trying to become Carrie. Here's the clip:

During the fight sequence with popular girl Evian, there's a callback to the previous scene:

The third and final reference to CARRIE in the film comes at the end of the talent show audition and should be instantly recognizable by looking at this photo: 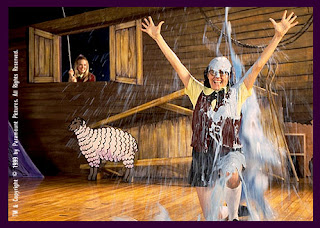 But in case that's not enough, here's the clip: