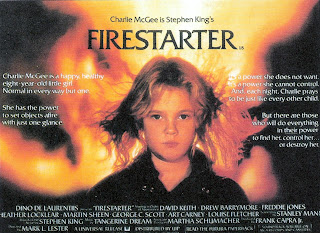 Nobody rips off Stephen King stories as well or as often as Stephen King does. Though that seems like a preposterous statement, there's more than a few recurring themes, ideas, actions, names and locations that run rampant throughout King's writings and his films. FIRESTARTER was the first of his subsequent stories with a lot of things in common with CARRIE. What's more, it also bears more than a passing resemblance to THE FURY, though it was half written when the John Ferris novel (which spawned the Brian DePalma film starring Amy Irving) was published. 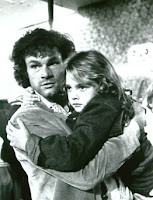 FIRESTARTER revolves around Charlie (Drew Barrymore), a troubled youngster who's inherited the ability to create fires at will. This pyrokinesis is a trait she inherited from her parents (Heather Locklear, David Keith), who met while trying to make some extra cash by participating in a government-run drug study. Now Charlie's on the run from a clandestine government agency who are hellbent on exploiting her special ability. Here's a vintage TV spot:

The rare full-length trailer, lots of photos and more are available at the great Creepshows: Stephen King Movies site.

In the film, Charlie only had the pyrokinetic and telepathic abilities (for the most part -- she stops a bullet in midair at one point). Both Carrie and Charlie had these powers in common in their respective novels -- and in the novel it's clear that Charlie had some telekinetic abilities too.

Released against films like BREAKIN' and HARDBODIES, FIRESTARTER was moderately successful (look again at the competition), and it ran routinely on TV for the better part of two decades, where it's still broadcast from time to time. Critics, however, were quick to note the connections to CARRIE, and they were brutal in their reviews. Even Stephen King himself hasn't always had kind things to say about the film. Here's a vintage clip from "Siskel and Ebert at the Movies" (the sound inexplicably synchs in and out):

Since I'm pointing out parallels, I should also mention that star David Keith later went on to play the role of Detective Mulchaey in the 2002 version of CARRIE.

The idea to franchise FIRESTARTER in the form of a weekly TV series, which was a trend in the '80s ("Starman," "Down and Out in Beverly Hills," "Fast Times," "Ferris Bueller," etc.), was tossed around and abandoned. That is, until the turn of the century. In early 2002, The Sci-Fi Channel premiered FIRESTARTER: REKINDLED, a mini-series that (like the version of CARRIE that would air later the same year) doubled as a pilot for a TV series. This version featured Charlie (Marguerite Moreau) grown up and still on the run from the people who run "The Shop."

The film, "based on the novel by Stephen King," ignored the first movie, and even rehashed some scenes. It was also made slightly more clear that Charlie had some telekinetic powers. Inexplicably, when released on DVD the film was re-titled FIRESTARTER 2; it was even supposed to have been double-packaged with the first film (though it looks like that fell through at the very last moment). Despite heavy promotion (that even appeared off-network), ratings were lackluster, critics and people online have savaged it, and ultimately a series never materialized. Here's the teaser for the film: