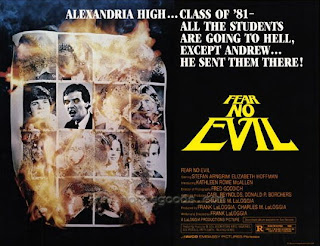 FEAR NO EVIL is the story of Andrew (Stefan Arngrim), an awkward high schooler who has unworldly powers -- because he's the reincarnation of Satan. Tormented by his peers, feared by his parents and hunted by several human archangels, Andrew's ultimate reign of terror may or may not prove to be short lived... Here's a collection of TV spots which include some spoilers:

The first film of director Frank LaLoggia (LADY IN WHITE), FEAR NO EVIL, (known as LUCIFER in some regions) is a mixed bag. The movie feels like a cheesetastic Hammer/Corman production with a high school plotline synthetically injected in. Further bogging down of the already overly ambitious film occurs when a zombie army appears... LaLoggia wanted to make his own Hammer-like film, but various investors insisted on piling in ridiculous elements which ultimately resulted in a film that doesn't really work. There are moments of genius (including a particularly effective scene of baby Andrew being baptized and a death-by-dodgeball scene), and visually the film is superb, but the story has too many jerky detours.

The movie lifted elements from a variety of other films. It's not too much of a stretch to compare Arngrim as the outcast high schooler with supernatural powers to Spacek's CARRIE, though the character seems to have been more inspired by young Damien in THE OMEN. There is, however, a shower room taunting scene which, like the scene in CARRIE, seems to be the part that everyone remembers... but for very different reasons. You stick a group of butt naked guys into a shower on film and it's gonna be labeled 'homoerotic' anyway, but LaLoggia went a step further and made the scene memorably uncomfortable, much like DePalma before him. Here's a clip; be forewarned that there's an extremely brief multi-ass-shot (though I cut it off right before the scene went frontal):