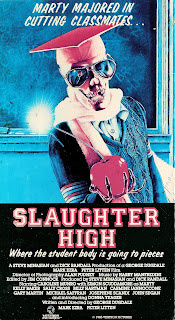 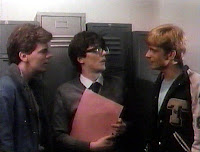 In the horror genre, there have become many standard sub-genres. CARRIE spawned the ever popular 'high school loser gets revenge by killing off their classmates' sub-genre. After premiering on video, SLAUGHTER HIGH earned a rep for itself, and a particular interest from fans of '80s slashers for its uncomfortable prank gone awry scenes, its bizarre (but appropriately fun) finale, and for its overall gruesomeness. Filmed under the title APRIL FOOL'S DAY, they were forced to change the name to SLAUGHTER HIGH when Paramount's APRIL FOOL'S DAY was released first.

Marty (Simon Scuddamore) is the school nerd. Belittled by the cool kids, he unwittingly walks into a prank on April Fool's Day that finds him taunted by his peers... in the girls' locker room... in the nude (seeing a connection yet?). Instead of"Plug it up," they chanted the then-popular Wendy's slogan, "Where's the beef?" The cool kids are reprimanded by the coach for their antics and ordered to his detention, where they decide Marty has to pay for getting them into trouble (anything yet?). Their next prank results in an unfortunate accident for dear Marty... Flash forward ten years and all of the cool kids are invited to a high school reunion. They arrive to find the school a decrepit mausoleum that's been closed for five years. Before long, you know the drill, many are hacked to death... blah, blah, blah. The ending, however, is noteworthy -- because if you're not watching for it, you won't see it coming until it strikes.


Credit where it's due, I swiped the trailer from fearnet.com. 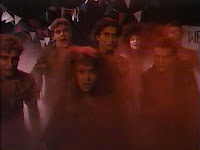 The build-up to Marty's accident occurs during the first third of the film, and it echoes back to CARRIE. From that point on, its turns to the routine HALLOWEEN / FRIDAY THE 13th hack and slash standard -- with some of the most moronic characters ever. I mean, after getting splattered in blood, with a killer still on the loose, would your next step be to go and take a bath? Didn't think so. And why there's even a sole bathtub in an old school building is beyond me. Oh yeah, for gratuitous nudity purposes. I forgot. Anyway...

After the first prank in the shower (I'm not showing that clip in its entirety, suffice it to say skinny Scuddamore was displaying more uncut 'beef' than his peers were crediting him for), the director seems to have stolen DePalma's camera blocking for the set up of the next prank. Although nowhere near as elaborate, this scene bears an uncanny similarity to the reveal of the bucket of pig's blood. It also, however, contains a SPOILER:

Later in the film, as victim fights off masked attacker, we have this little clip, which is reminiscent of a scene from CARRIE. What's most disconcerting about it upon first viewing, is that they give no other hints that the killer has telekinetic powers, nor any electrical ingenuity to pull off such an elaborate parlour trick...

Perhaps the thing that's most noted about the film is that star Simon Scuddamore (whatta name!) committed suicide shortly after it was released. There's been speculation that Simon, who had a tortured childhood, was pushed over the edge by taking the role in this film. Good thing I didn't show the initial prank -- this knowledge makes it even more uncomfortable...

SLAUGHTER HIGH was released on VHS around the world in the late '80s, though it the tape is difficult to obtain today -- particularly the unrated print. It should be noted that in some parts of the world the film's known as APRIL FOOL'S DAY -- and in other regions, CUTTING CLASS and TERROR TRAIN were marketed as sequels (?!!). The film seems to be tied up in another case of 'nobody knows who holds the rights,' so until that gets straightened out, it's not officially out on DVD... though DVD-R's aren't very hard to come by.

The entire film is currently available to watch at Fearnet. 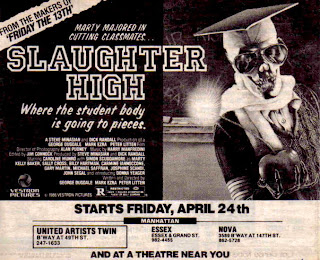 how can you rip the trailer off of fearnet ? if you can let me know it'd be much much appreciated!

I've got a program called "Replay Media Catcher" that saves videos from the net. Tried to find another way to tell you to save it, but I can't seem to figure out the address of the flv video file itself on fear.net.

Vinnie, thank you very much for all the efforts you're making with this site. ¡I thought no one but me realised the connections of this rare film with Carrie! Can you believe that I saw Slaughter High prior to Carrie? They were both on the self of this videoclub here in Spain, and the cover of Carrie frightened me so much that I didn't dare to take it with me (i had to be around 12). It was years after when I saw Carrie on the TV and it became my fave film EVER. Just for you to know, here in spain Slaughter High was called "El dia de los inocentes", which is our equivalent of April fool's day. No need to say that nowadays is impossible to find that movie here, which I saw ¡with spanish dubbing! Again, thanks again for your site.

You think you can give me the URL?